The following local rules apply to playing golf at the Flagstaff Hill Golf Club and are printed on the back of all score cards, to be read in conjunction with the Rules of Golf and the Temporary Local Rules as published on the Local Rules noticeboard outside the Pro Shop.

A new Temporary Local Rule, Preferred Lies on Fairways Only Varied from 13 August 2020.

The temporary rule allowing a preferred lie in bunkers due to the removal of rakes for COVID-19 ceases on Wednesday 1st July.

The local rules have been revised for the 2019 Rules of Golf and provide a number of additional options for players, so it is important to read them. They are published in an abbreviated form, which is printed on the back of score cards, and the full version which contains more detail. A summary of changes is also available.

Players should regularly check the Local Rules noticeboard outside the Pro Shop, which contains the official local rules applicable, which may over-ride local rules printed on the scorecard or on the website. It is the Player's responsibility to be familiar with the published local rules.

Note: Rule 6.1 requires play to commence in the Teeing Area.

If the ball is in the penalty area (dam), relief may be taken from the drop zone as an alternative to the options of rule 17.1, for a penalty of 1 stroke.

If there is doubt whether a ball is in, or playable in the penalty area, the player may play provisional ball as above.

If the original ball is found outside the penalty area it is in play.

If the original ball is found in the penalty area the player may play it as it lies without penalty or continue with the provisional ball for a penalty of one stroke.

If the original ball is not found within the three-minute search period, the provisional ball is in play with a penalty of 1 stroke.

The area to the left-hand side of the 16th fairway, demarcated with white stakes with black tops is Out Of Bounds and is a no play zone. The player must take free relief under Rule 16.1f(2) if his or her ball is on the course and anything in the no play zone interferes with the player's area of intended stance or swing. The player must not play the ball as it lies.

If it is known or virtually certain that a player's ball hit an overhead cable or supporting structure, the stroke does not count. The player must play a ball without penalty from where the previous stroke was made (see Rule 14.6).

During play of the 15th hole, if the protective fence adjacent to the 18th tee is on a player's line of play:

The player may take free relief by dropping a ball in and playing it from the dropping zone defined with orange bricks. But this relief is allowed only if the ball is in play nearer the hole than the dropping zone (see Rule 14.3).

Alternative to Stroke and Distance

When a player’s ball has not been found or is out of bounds, the player may drop a ball under penalty of two strokes in this relief area (see Rule 14.3):

A. Anywhere on a line FROM:

•    the closest point on the hole being played that has grass cut to fairway height or less, and which is not nearer the hole than the ‘ball reference point’.

This line must be the most direct line between the two points with the condition that no part of it may be nearer the hole than the ‘ball reference point’.

B. On a line starting at any spot that meets the requirements of A and then which goes directly away from the hole from that spot (with no limit on how far back).

C. Anywhere within two club-lengths of any spot that meets the requirements of A or B, but not nearer the hole than the ‘ball reference point’.

When a ball is put into play under this Local Rule it is not a provisional ball, it has become the ball in play.

But, the player may not use this Local Rule when:

•    It is known or virtually certain that the original ball came to rest in a penalty area, or

•    The player has already played a provisional ball.

Illustration: Refer to web page www.golf.org.au/LR-oob-lostball and the diagrams below: 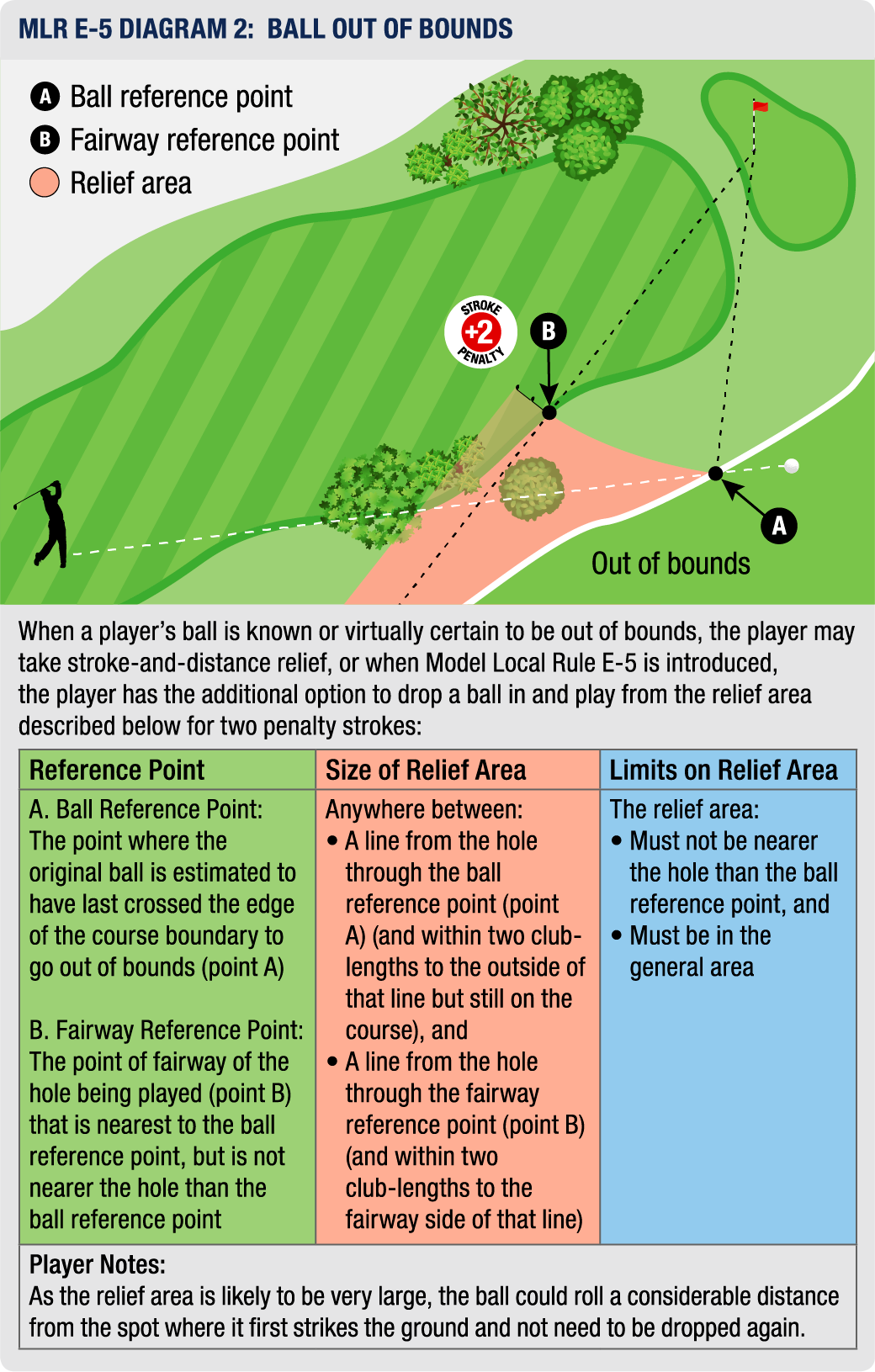 All hoses and sprinklers on the course, and spray there-from are treated as immovable obstructions from which free relief is allowed under Rule 16.1. Relief is not allowed to be taken under Rule 15.2.

All roads and paths on the course including tracks worn by maintenance vehicles, even if not artificially-surfaced, are treated as immovable obstructions from which free relief is allowed under Rule 16.1.

Ground under repair is defined by any area encircled by a white line or marked by white stakes.

Ground under repair also includes the following conditions, whether marked or not:

•    Deep furrows from water damage in bunkers or residential water runoff in the general area.

•    A fallen tree branch may be treated as GUR or a loose impediment.

Garden beds adjoining tee blocks and the practice putting green are GUR and are No Play Zones, relief MUST be taken under rule 16.1b.

Any bunker marked with a single white stake in it is out of play and is treated as GUR in the general area and a no play zone, relief MUST be taken under rule 16.1b.

Fenced telecommunications compounds on 15th LHS and 17th LHS are OUT OF BOUNDS. These were formerly GUR and some whit paint on the posts remains but does not mean these are GUR.

The young trees and shrubs identified by white stakes are no play zones:

If a player's ball lies anywhere on the course other than in a penalty area and it lies on or touches such a tree or such a tree interferes with the player's stance or area of intended swing, the player must take relief under Rule 16.1f.

Wood-chip mulch is an integral object and no relief is available. The ball must be played as it lies.

Unless otherwise noted, the penalty for a breach of a Local Rule is the general penalty (stroke play – two strokes, match play – loss of hole).

Bunker rakes should be placed in the flat area of the bunker aligned with the direction of play.

Blue stakes (150m) and sprinkler head markers indicate the distance to the centre of the green being played.

The fenced Telecommunications compounds near the 15th tee and left of 17th are Out Of Bounds.

While a score card is not required in Match Play a Match Play card is available with the Match Play Index, based on starting from the first tee. This index is used for Handicap Match Play and follows the Golf Australia recommendations. Not that for this index, the hole number is 1 for the first hole you play, regardless of which golf course hole this happens to be. It has nothing to do with the degree of difficulty of the hole but is designed to apportion the handicap difference fairly over the match.